One of the perils of working at a tech company… 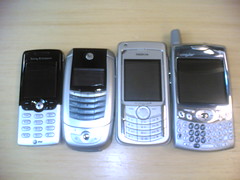 I have lots of mobile devices for testing various things (the one second to the left runs Linux, believe it or not). Someone needs to invent me some bigger pockets.

As Russell recently pointed me at, the numbers for this year are a staggering 500 million cameraphones sold. A few weeks ago, Morgan and I gave a guest lecture on the research we’ve been working on at Berkeley about social usages of cameraphones, and I had the chance to informally ask a room of about 300 U.C. undergraduates how many of them owned cameraphones. Over 90% of them raised their hands. The rise in ownership has been staggering–when the same question was asked of a graduate class (in a techiest department on campus) just one year prior, only about 10% had a cameraphone.

What comes next? I agree with Russell that music/audio will be the next big thing (frankly, I’m surprised it hasn’t already), but I’m still not convinced about the mainstream desire to watch video on the subway. We’ll see soon enough.